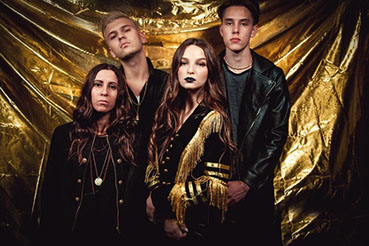 Fronted by 15-year old, Anastasia Grace, who’s beguiling presence adds an air of mystery to the proceedings, she’s flanked by her 19-year old brother, Maxamillion, who shares vocal duties while shaping the sonic direction of their exposition. Musically interconnected their whole lives, the dynamic duo have been performing live for the past six years, with initial writing for their debut EP commencing in early 2015. Out of these sessions came the song that instantaneously cemented their status as a force to be reckoned with, the searing gothic mysticism of "All Went Black.” Maxamillion recalls, "Since Anastasia was bullied in middle school, one of our passions has always been standing up for people in situations who might not be the most popular or easily accepted. All Went Black stood with that passion.” The sentiment is echoed by Anastasia, "Originally, we began to make and share music for us to escape our own lives. But when we saw the effect it had on people, it became a channel to connect."

Penned by Anastasia at age 12, its hypnotic refrain, "Where did you go, Are you coming back, Where did you go when it all went black,” is a stunning outcry against abandonment and the resulting darkness of being left behind by those we love. It doesn’t just leave a mark. It deposits a scar, but don’t be afraid of the dark because even in the depth of the night, there is light. A singular voice, brimming with soul, subconsciously encourages you to never let go, that strength built from moments of weakness will help console the hole in your soul. The corresponding visual, directed by Chris Hill, known for his groundbreaking video for Cut Copy’s “Free Your Mind,” which starred True Blood's Alexander Skarsgard, crystalized their vision as a school bus overrun by a frenetic monster-mask masquerade epitomizes the cataclysm. Its cinematography singes as the anxiety unhinges.

In conjunction with the video release, which went viral, quickly amassing 100,000 views, the group partnered with the Stop Bullying Now Foundation to help contribute to putting an end to the epidemic of bullying among today’s youth, empowering them through counseling, life skills training, open communication, and creative outlets.

Understanding the depth of The Haunt is to dig beneath the surface. Drawing from an eclectic palette of influences such as Twenty One Pilots, Cage The Elephant, Lumineers, Jack White and Billie Holiday, their self-titled EP is a whirling dervish of the ups and downs of two young souls navigating convergent and divergent roles. Merging bits of Alternative, Indie, Rock and Roll, Garage, and Blues, the expedition is an evenly spilt half dozen. Broken into Side A and Side B, the adventure begins with “Brat,” an instantly infectious floor-shaker that recalls the best of Catfish & the Bottlemen and Bad Suns. From there, it’s a sibling tour-du-force as Ana and Max effortlessly trade vocal lines on the voyeuristic vamp of “Dirty.” The duo then flirt with an Addams-family style bassline on the gothic “Streets & Lies,” which brims with undertones of Bauhaus, My Chemical Romance and Siouxsie and the Banshees, and prowls the dark recesses on the subconscious on “Get Away,” which its hair-raising vocal bloodletting of “Get away pain, I will rise to the sky and wave goodbye to the people who let their whole lives pass by.” It’s this sentiment that resurfaces in the frayed majesty of “Bullet,” The Haunt's emotional centerpiece. It’s a devastatingly beautiful ballad that builds slowly from sparse instrumentation to a sweeping conclusion, both, literally and figuratively, as her ethereal yearning eclipses a shattered rainbow, “Running, I keep running off. Help me, I can never slow.” Xune Magazine christened Anastasia's powerful range as "a young Florence Welch with far more attitude."

Produced by Joshua Diaz and Maxamillion Haunt, the resultant excursion is an apt beginning to the textural journey ahead, one that explores all facets, and varied faces, of the human condition. Recorded in their home base of Fort Lauderdale, Florida, this portrait is the product of many late nights, early mornings, arguments, celebrations, and learning to love something that doesn't always love you back.

In person, The Haunt want reciprocation. Stemming from their familial bond and their all-for-one, against-all-odds belief, they strive to build a meaningful rapport with their growing fanbase. In concert, they faithfully recreate their evocative songs, with note-for-note clarity, encouraging on openness to immerse your senses. Feel it with every cell in your being. Channeling the likes of Karen O, Cat Power, Shirley Manson, Amy Lee (of Evanescence), Lorde and the ghost of Nina Simone, Anastasia is an indisputable talent, her powerful voice able to command your undivided attention. With a telepathic counterbalance from Maxamillion, and a steadfast rhythm section, the quartet embodies the essence of spontaneous combustion as they exploded onto the scene, quickly building a ‘ride or die' following before embarking on their first national tour in early 2018.

The due diligence and allegiance to excellence is paying off. Lauded in the pages of Atwood Magazine, Broward New Times, and Miami New Times, and championed for a spirited performance on the NBC Morning Show in Miami, the group was personally invited by Saigon Kick frontman Jason Bieler to partake in a special fundraising concert for the families and victims affected by the shootings at Marjory Stoneman Douglas High School in Parkland, Florida.

Word of their incendiary live show has provide the band with a continual stream of opportunities. Next up is a 42-city voyage with glam rock buzz band Palaye Royale which will see the band blaze venues in Europe and the UK from September 24 to October 5 before jumping back across the pond for a full North American run from October 24 through December 2. On the coattails of the cross-continental trek is the premiere of a 4K concert extravaganza filmed for Comcast Xfinity that will air On Demand to 24 million homes. 2019 will see the band carrying the torch to new lands and thousands more adoring fans, playing upwards of 100 shows.

The Haunt is a fast moving train that has a single destination. Emancipation. Hear that sound. It’s the sound of disintegration. Freedom from expectations. Remember the feeling you had when you first experienced sublimity. Your eyes rolled back and all went black.

Don’t be silent. Be vigilant. Live life to the max.