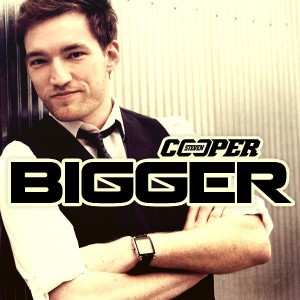 Stereotypes are made to be broken. Steven Cooper proves that talent is talent, and that musical brilliance is musical brilliance. Fusing pop and hip-hop elements with aggressive delivery and exceptional lyricism, Steven Cooper has been captivating music fans around the globe. You can’t help but want to listen to his inspirational, heartfelt and optimistic music. Being an accomplished and seasoned performer, a prolific writer and a first rate producer making music is simply what Steven Cooper was born to do.

Steven’s hit song “Bigger” features Akon and, at the time of its release, broke into the top #100 downloaded singles on iTunes. He has also been featured alongside notable artists such as Tech N9ne, Kid Rock, David Cook and many others. Steven Cooper’s catchy and captivating songs have been featured nationally on ESPN, Fox, MTVu and ABC Family. He has performed both nationally and internationally at distinguished venues and festivals. Steven recently headlined the Promise Land Festival in Ottumwa, IA for over 3500 attendees.

Born in the Midwest, Steven was raised by his young mother. His father disappeared before Steven was born. When asked about his upbringing, Cooper recalls growing up in a home surrounded by sex, drugs, violence, and addiction, which eventually left his family homeless. He dealt with depression and anger issues in his teenage years as a result of his tumultuous upbringing and the fact that he was bullied in school. He began to write lyrics and though he was scared at first, he decided to share his songs with the kids at school. His talent became a bridge between him and his peers. This is when Steven discovered that his music and drive could transcend barriers such as race and classism. From there, he decided to focus on his art and promised himself that he wasn’t going to be a part of the same vicious cycle as his parents.

An artist who is down to earth, kind, caring and extremely humble, much of Steven’s music addresses the fact that he does not quite fit into the hip-hop scene or any other mold. He can’t be anything other than one hundred percent authentic. An emcee that looks more like he may be a pop star in his fitted jackets, cardigans and ties, Steven also doesn’t resemble the recent wave of indie, hipster hip-hop artists. His song “Born To Do” talks about this struggle and the fact that he is not willing to give up on his dreams. His lyrics say “Every new day, every new night. This is my stage, this is my fight. This is what I was born to do.“ Steven Cooper is true to himself, and this is part of what makes him stand out from the crowd.

This year Steven will be releasing his new EP “One Night Out”, as well as having a single go to radio. Steven Cooper will be touring throughout the year. He will also continue to collaborate with and produce for other artists. Steven has an unparalleled passion and talent for everything that he does. One of the hardest working independent artists out there, 2014 certainly seems like it will be Steven Cooper’s break out year.